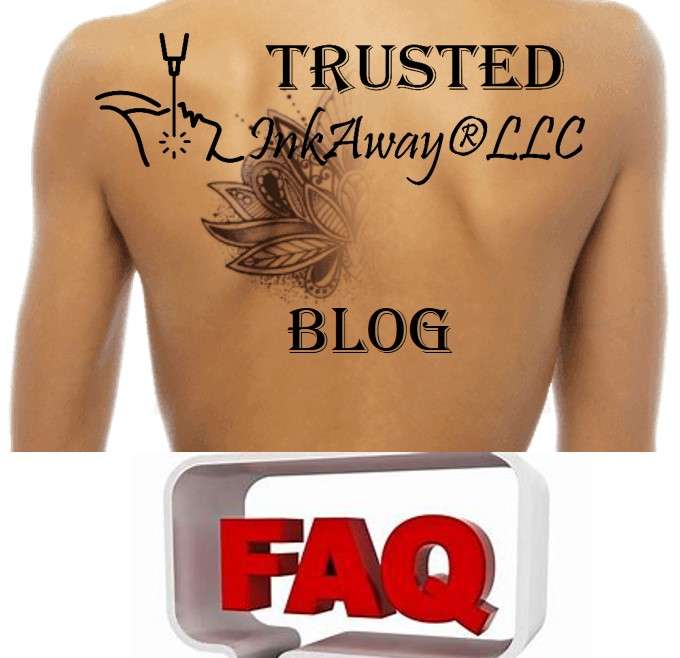 Question 1: How much does laser tattoo removal cost at TrustedInkAway?

A short answer is that the total cost depends on the size and total visits required to remove your unwanted tattoos. In general, laser tattoo removal requires multiple visits depending on your tattoos, your skin melanin concentration, your immune responses and other factors.  Many customers feel frustrated by the variable number of their visits or the uncertainty of the total amount of payments required to get their tattoos removed. At TrustedInkAway, we remove all hassles away by offering free additionally required sessions beyond the estimated number of total treatment sessions by the free consultation. We use the Kirby-Desai method to estimate your total number of visits.  You should get the same Kirby-Desai scale number no matter who gives you free consultation with the standard Kirby-Desai method. We use the Kirby-Desai scale number to remove uncertainties and hassles out of your treatments and provide the most affordable TRUSTEDINKAWAY® laser tattoo removal services to greater St. Louis communities:

(2) Special low-income plan and promotional plan: We have special low-income plan for people who has limited income and does need laser tattoo removal service, for example, in order to qualify for a new job. Additionally, special promotional plan might be offered from time to time.  We would also do our best to match offers from local providers.  Call us and find out!

Question 2: How long does it take to remove my tattoos?

The short answer is that only an estimation could be given. If we assume M
（usually between 4 to 6）weeks are required for fully recovering from one laser tattoo treatment session and your Kirby-Desai scale is Q, the estimated total time required to remove your unwanted tattoos is (Q-1)*M weeks. It is noted that this estimation is an averaged number without considering the differences between persons.

The short answer is that it hurts, but it is bearable. Most customers describe the sensation of removal as comparable to having a tattoo applied and it hurts less than their expectations even without any soothing procedures. At TrustedInkAway, we manage the pain associated with laser treatment with effective pretreatment icing and active skin cooling during laser treatment. We advocate posttreatment icing by customers at home. For customers who would like a more comfortable treatment, we recommend FDA-approved and OTC monograph compliant numbing screams to be applied at home 30 minutes before treatment session starts. Even customers with very low pain threshold are very comfortable with our procedure when all the above pain-management methods are adopted.

The short answer is that scarring from laser tattoo removal procedure is rare when using a FDA approved laser equipment and following the treatment protocol including aftercare instructions.

We have discussed the efficacies and risks associated with various tattoo removal methods in an earlier post. Laser is the only efficient tattoo removal method that breaks the tattoo inks without physical invasion into top skin layers. Laser tattoo removal is adopted by the majority of dermatologists, plastic surgeons, and other professionals because of its high efficiency, non-invasiveness, and much lower risk.

We still need to address the importance of using FDA approved laser machines and following the standard protocols. FDA approval is the first line of protection for the safety. Unlike European countries, United States regulate medical device with a much higher safety standard. Tattoo removal laser manufactures must prove to the FDA that their devices are as efficient and safe as similar devices already in the market before their devices can be legally marketed in the United States. Secondly, most good tattoo-removal lasers have already been extensively used by dermatologists for more than a decade and these clinical experiences have been transformed into the recommended protocols. Following the correct protocol is the second key to the low risks associated with the laser tattoo removal practices.

Question 5: Can you help revising a tattoo?

The answer is YES. For customers who wish to partially remove inks or reduce inks from their tattoo arts for a later modification, laser tattoo removal is the best option. By only exposing unwanted inks, or using reduced laser beam size, or using reduced laser pulse repetition rate, the tattoos can be selectively removed or reduced. It takes much less sessions for reducing inks than totally removing them.

Question 6: What are the potential side effects associated with laser tattoo removal?

Frosting occurs immediately after the laser treatment when the treated skin turns into a frosty white color. This is because the laser pulse energy absorpted by the inks heats up the skin tissue locally to a temperature over 100˚C and creates water vapors in the form of very tiny bubbles in a very short period of time, usually several nanoseconds. The frosts will naturally disappear within 20 minutes. This could be interpreted as a good sign of laser treatment since it proves that laser is working for the inks.

Blistering occurs at the superficial skin when the tiny blood vessels around the tattoo inks are broken by the lasers as the inks are broken up. Blisters may contains body liquid and inks. Blisters are quite normal and can be interpreted as the sign of the would-healing process. Blisters should take between 3-14 days to heal up completely, providing you don’t burst them.

Scabbing usually appears 8-72 hours after laser treatment along with collected ink particles. When the scab falls off, the top layer of ink is gone. Picking scabs should be avoided because it increases the risk of scarring. Depending on the size and location of your tattoo, most scabs will disappear within a couple of weeks.

Discomfort should be experienced by most people after the laser treatment. The level of discomfort also depends on the location of the tattoos. Discomfort is stronger when tattoos are on the wrist, feet, face and fingers comparing to skin locations with more fat or muscle beneath them. In general, the discomfort is commonly compared to an elastic band being slapped against your skin.

Itching is usually interpreted as another good sign that your immune system is working and repairing the "damages" caused by the laser treatments. You must not to scratch the area because scratching could break the skin and create a wound, which will lead to scarring or infection. You should not apply creams or lotions to the area too.

Permanent scarring is very rare when laser tattoo removal procedure is performed with a FDA approved laser and standard protocols. If scarring does happen, it usually isn’t that noticeable and can be minimized with Vitamin E oil or over-the-counter silicone patches. Before your skin has fully healed from the laser treatment, do not apply any cosmetic products. In order to minimize the chance of scarring after the laser treatment, drink plenty of water, get enough sleep each night and quit cigarettes if you happen to smoke. These measures can boost your body’s immune system and help the process of pigment elimination and skin repairing. Additionally, try to avoid direct sun exposure, as ultraviolet radiation may change your skin’s pigmentation and increase the risk of scarring due to greater sensitivity.

Hyperpigmentation and hypopigmentation are two side effects when
your skin’s natural pigment or melanin is affected by the laser treatment.
Hyperpigmentation is associated with darkened skin by laser treatment. It is typically seen on people with darker skin and active tans which will usually resolve by itself. However, there are cosmetic products available to help even out skin tones. Conversely, hypopigmentation is where your skin’s normal pigmentation has been reduced or removed. As a result, lighter patches of skin will be visible. It can sometimes take months or even years for your skin’s pigment to appear normal again. For some people, it may be difficult to regain the original skin tone.

Infection is very rare for laser tattoo removal because it doesn’t physically break top skin layers, especially when aftercare instructions are strictly followed. However, the risk of infection become much higher if the blisters are not burst naturally or the scabs are not shedding off naturally. In the event of infection, contact us or your dermatologists for help.

In summary, although there are quite a few possible side effects to laser tattoo removal, most of the problems are uncommon in practices. In the cases when problems do occur, the majority of them are treatable or not too distressing.

Question 7: How does the laser tattoo removal work?

Laser tattoo removal is based on the scientific theory of selective photothermolysis, i.e. using laser of a certain color to selectively heat and disrupt the colored pigments with minimum collateral damages to their surrounding skin tissue.  The fade of tattoo is due to the recycling of the pigments by your immune system in the subsequent wound-healing process. The above shared video by Dr. Chan explained how does the laser tattoo removal work in simple languages. It is noted that there are significant arguments on picosecond laser vs nanosecond laser in literature.  It is helpful to read our post that does a most truthful literature review on this topic.

Laser tattoo removal is usually performed with very short laser pulses in nanosecond or even picosecond regime.  However, the proposed mechanisms behind laser tattoo removal have their physical, chemical and biological origins.  Pigmented particles of tattoo will experience rapid temperature rise and volume expansion upon the energy deposition or excitation by a short laser pulse.  However, most of the temperature rise and the volume expansion will be lost after a short period of time, determined by thermal relaxation time (time taken for 50% of heat energy to be dissipated away) of these particles.  Photoacoustic waves are generated along with the volume changes of these particles.  Laser energy is transformed into both thermal energy and mechanical energy carried by the photoacoustic waves.  In many cases, large laser pulse energy absorbed by pigmented particles may cause optical breakdown, plasma generation, chemical reactions between plasma and pigmented particles, cavitation and generation of acoustic shock-waves.  These pigmented particles might be pyrolytically altered or shattered into smaller particles by the photoacoustic waves and acoustic shock-waves.  Hosting cell necrosis and surround tissue damage might be induced thermally and mechanically during this process.  In the end, the wound healing process might remove partial pigmented particles through rephagocytosis and alter the dermal scattering coefficients of the affected tissue, which might make the deeper pigmented particles less visible. Some pigmented particles might be removed along with the scabs during wound-healing process.