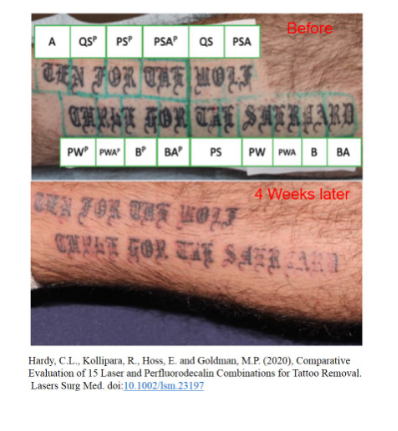 Laser medicine is still a rapidly developing science discipline even in the year of 2020, almost six decades after the invention of laser.  Lack of knowledge about laser tattoo removal presents the biggest hurdle to people who seeks help on their unwanted tattoos.  In this post, I want to share with you a recently published clinical study.  You have a chance to find out the truth of laser tattoo removal by your own eyes.

This study on laser tattoo removal was conducted by Dr. Curtis L. Hardy and his colleagues in San Diego and published on the journal of Laser in Surgery and Medicine in January.  Dr. Curtis L. Hardy included multiple factors in his study, including laser types (nanosecond laser, picosecond laser and CO2 laser) and laser treatment methods (single laser exposure, repeated laser exposure, and perfluorodecalin patch or PFD). He compared different combination of lasers and treatment methods on the tattoos on a single patient. In the figure below, the “before” and “4 weeks later” photos are presented. Yes, you do not need much scientific knowledge to tell which combination is more effective by your own eyes.

Comparing the treated area by single laser exposure (QS or PS) with area by B (R20), your eyes will tell you what a big difference it is!  Here, R20 means repeated laser exposure with 20 minutes in between.  However, R20 laser tattoo removal is time consuming and it at least doubles laser costs of the service provider in additional to 20 minutes of waiting time between repeated laser exposure.  Thus, it is not adopted by most laser tattoo removal service providers. The significance of R20 protocol for their superior treatment outcome has been discussed in my previous posts.  The photos from Dr. Hardy's study explicitly show the striking difference between R20 and single-exposure laser treatments for the first time.  That is why you should call TrustedInkAwayLLC or (636)-244-7399 for the removal of your unwanted tattoos if you are in St. Louis MO. 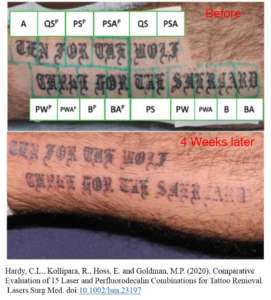