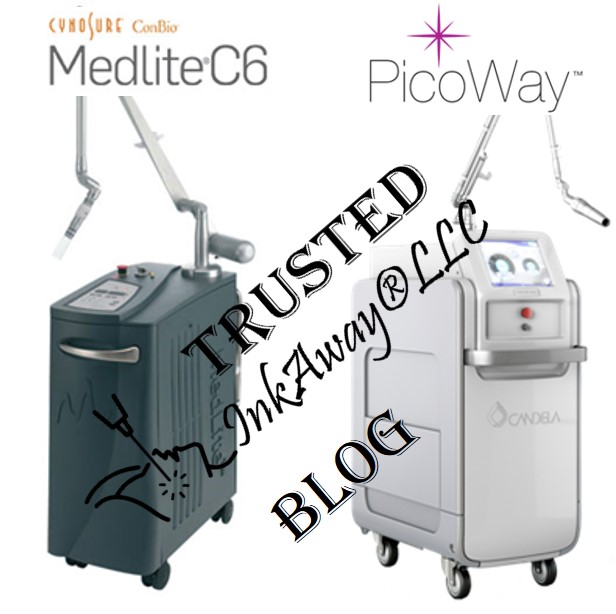 The first laser was invented in 1960.  The first laser treatments of tattoo was performed by Goldman in 1965.  Q-switched laser evolved to a standard technique for removing pigments from skin in the past several decades.  However, scientific knowledge about the mechanisms of laser tattoo removal is still incomplete.  The very basic theory of laser tattoo removal is proposed or interpreted by Rox Anderson in his 1983 science paper on selective photothermolysis.  The theory of selective photothermolysis dictates that both the laser wavelength and laser pulse width are important parameters for optimizing treatment outcome.  Indeed, they are the most critical factors in addition to laser influence and laser beam size for laser tattoo removal.  For a certain color of tattoos, the right laser wavelength should be used in the first place.  The larger laser influence and beam diameter, the deeper pigments can be treated. The selection of laser pulse duration is based on the concept of minimal collateral damage when the laser pulse duration is less than the thermal relaxation time of the pigmented particle or ink.  However, the theory of selective photothermolysis does not directly relate lase pulse duration with the clearance of pigments. The purpose of this post is to provide the most truthful and accurate review on the picosecond laser tattoo removal and help people to make most informed decision regarding to their tattoo treatment options.

Laser tattoo removal is frequently explained as a particle fragmentation process by laser.  However, Ross's results [1] showed that there are no microscopic difference between picosecond-laser-treated black inks and nanosecond-laser-treated black inks regarding to particle sizes. Thus, the idea that picosecond laser treatment might result in smaller particles was not experimentally supported by Ross's experiments.  Ross hypothesized that higher peak temperature rise induced by a picosecond laser pulse may cause more chemical reactions and reduces more absorption of carbon inks than a nanosecond laser in his experiment.  However, Ross [1] might neglect one mechanism behind it, i.e. photoacoustic waves excited by laser irradiations.  A short picosecond laser pulse can always confine its pulse energy deposition into pigmented inks better than a nanosecond laser no matter the size of the ink aggregations and may result in higher interface temperature rise at the ink surface.  According to the scientific theory of photoacoustics discovered by Alexander Graham Bell in 1880, the excited photoacoustic wave pressure is proportional to the Grüneisen coefficient of the tissue, which is temperature dependent.  When the fluence and optical absorption coefficient of ink are the same for both lasers, the picosecond laser can excite larger photoacoustic wave since its frontal part of its laser pulse could induce higher peak temperature rise at interface due to better heat confinement and the remainder of the pulse could generate larger photoacoustic pressure due to larger Grüneisen coefficient enhanced by higher interface temperature.  The third mechanism is related to the high temperature rise that could evaporate the surrounding water in the skin tissue and created acoustic shock wave, which can disperse the ink aggregations much more efficient than the photoacoustic waves.  There are many advocators of picosecond lasers who claimed a fourth mechanism, i.e. the "mechanical" mechanism. In laser medicine, the laser-tissue-interaction mechanism could migrate from thermal (photoacoustic) mechanism to mechanical mechanism when the pulse duration migrates from nanosecond to picosecond  regime when the laser intensity of ultra-short laser pulse becomes so high that the laser pulse essentially evaporate tissue from surface mechanically and non-selectively.  Obviously, such a "mechanical" interaction should be avoided in laser tattoo removal.  It may set an upper limit on the maximum laser intensity or lower limit on the laser pulse duration. So the "mechanical" mechanism of picosecond laser tattoo removal is wrong.

Although it is not new in laser physics literature that short laser pulsed can be significantly compressed with an absorption-saturation medium, it was not utilized by a tattoo removal laser until 2012.  It was marketed as a "picosecond" laser while it was, in fact, a compressed version of Q-switch laser in sub-nanosecond domain.  Since the new "picosecond" laser  is compressed from a traditional Q-switch nanosecond laser, its full laser fluence is always less than its original nanosecond laser considering the loss introduced in the process of non-linear pulse compression.  Nanosecond laser has been proved to be safe in tattoo removal practice even it is run at its full strength.  Significant adverse events such as scarring are very rare.  According to the theory of photoacoustics, the picosecond laser has to overcome the disadvantage of lower laser fluence in order to compete with a nanosecond laser.  In the meantime, the picosecond laser should also has a safe laser intensity (laser fluence divided by pulse duration) that will not mechanically evaporate surface tissue.

The first randomized controlled single-blinded clinical study that used the full strength of a nanosecond laser is the paper [8] published by Pinto on British Journal of Dermatology in 2017.  Pinto concluded that the use of picosecond pulse does not provide better clearance than nanosecond pulses except the reduced pain.  However, the design of Pinto's study did not answer whether a picosecond laser will outperform a nanosecond laser when the same laser fluence setting is used.  Secondly, he included both pretreated tattoos and non-treated tattoos in his studies in order to address the claims that picosecond laser is more efficient on pre-treated tattoos.  Ross [2] criticized Pinto's design because he believes that picosecond laser might fragment ink particles into smaller particles, an attractive concept that might not be true.  If both Ross [1] and Pinto [9] have drawn correct conclusions from their studies, we will need more powerful picosecond lasers to really demonstrate its advantage over a traditional nanosecond laser.  For example, the Picoway picosecond laser [3] could only generate 1064-nm laser fluence at 1.4 J/cm2 for the 6-mm diameter setting while the MedliteC6 laser can generate 3.5J/cm2 laser fluence for the 6-mm diameter setting.  Its laser influence need to be improved to at least 3.5J/cm2 at the 6-mm diameter setting to show its clear advantage over a MedliteC6 laser if the conclusion of Ross [1] is right.

In summary, the claim that current picosecond laser is significantly better than a full-strength, traditional nanosecond laser such as a Medlite C6 is not conclusively supported by current scientific literatures. More independent studies with an experimental design similar to studies [1,9,10] are encouraged.  It is possible that when the picosecond laser pulse energy become comparable to the nanosecond laser, the picosecond laser may start to show clear advantages.  If a picosecond-laser-tattoo-removal service provider claims that their picosecond laser can remove your tattoos two time faster, you should ask for reference of clinical studies that compared their picosecond laser to a full-strength, gold standard nanosecond laser.  Some people might want to know what are the best option to remove unwanted tattoos most efficiently at this moment.  The only option that has been confirmed by several studies in scientific literature is the R20/R0 protocol or the protocol with multiple laser exposures in a single visit.  Check out our post on the topic of R20/R0 protocol for more information.

[10] A. Lorgeou, et. al,"Comparison of two picosecond lasers to a nanosecond laser for treating tattoos: a prospective randomized study on 49 patients", European Academy of Dermatology and Venereology 32: 265-270,2018.