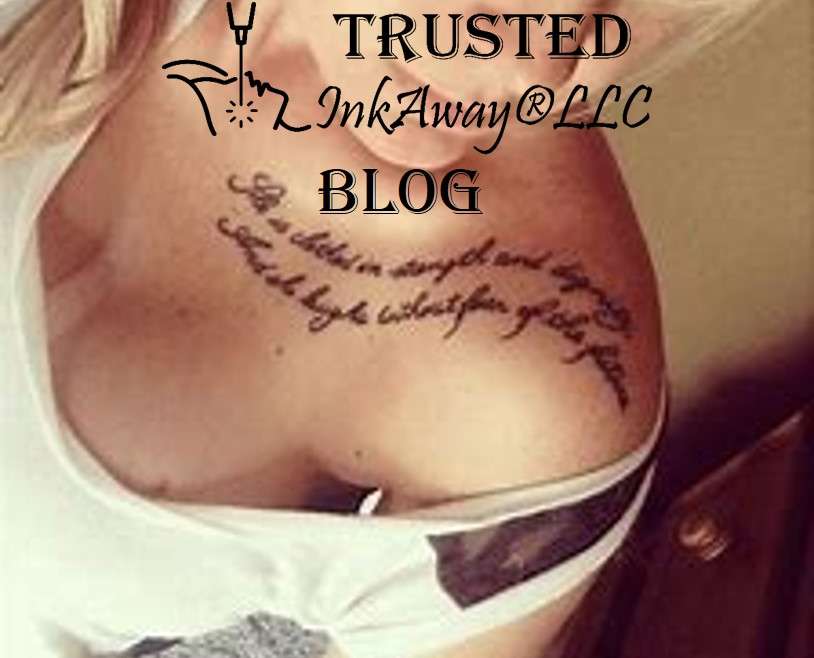 The tattoo removal market has boomed following fashion-trends created by more and more tattooed celebrities over the years around the world.  Reasons or motivations behind the tattoo removal needs include social pressures and personal reasons.  Most people who wish to get their unwanted tattoos removed are puzzled by so many alternative options with various attractive claims in addition to the gold standard laser tattoo removal adopted by the majority of dermatologists, plastic surgeons and other professionals.  It is the purpose of this post to review all tattoo removal options and their associated risks and efficacies, and provide useful information to people who wish to make their informed decisions on how to remove their unwanted tattoos.

All tattoo removal procedures can be divided into two categories, non-invasive and invasive procedures depending on whether the procedure requires surgically exposing inner skin tissue.  Obviously, non-invasive methods have lower risks of infection and scarring comparing to invasive methods that break into epidermis or even damage the bottom of epidermis where new skin cells grow.

The most frequently found alternative tattoo-removal option is the non-invasive tattoo-removal creams with various ingredients.  These creams were experimented for many decades by tattooists and beauticians for the removal of liver spots and skin pigments.  They are administered as a lotion or paste on the skin surface non-invasively.  Repeated applications lead to local bleaching or whitening of skin due to depigmentation agents and give the impression of fading tattoos.  The ingredients of all the creams are frequently advertised to be all natural and that none of them contain hydroquinone, trichloroacetic acid (TCA), or Chinese ingredients.  However, the presence of skin bleaching agents such as kojic acid, alpha arbutin (a hydroquinone derivative), or dimethylmethoxy chromanyl palmitate in the creams is no secret for insiders.  Additional ingredients of the creams may include parabens, salicylic acid, or flower and plant extracts.  Although the risk associated with this procedure is low, significant removal of tattoos is barely possible because the intact skin acts as a solid barrier that prevents any substances penetrating into the skin as well as any pigments in the skin leaving the skin.  Therefore, you may spend a lot of time and money on the tattoo-removal creams without expected outcomes.

The next group of non-laser tattoo removal methods was originally created by a French physician, Gustave Variot, in the 19th century and named Variot's method.  It involves puncturing the skin with tattooing needles, delivering a solution into skin and inducing escharotic necrosis of the epidermis and dermis and shedding away the tattoos inks along with scabs.  A solution of tannic acid (for inducing escharotic necrosis) and silver nitrate (for infection prevention) was used by Gustave Variot.

Since then, many similar methods with varying ingredients of solutions were utilized for tattoo removal.  For example, an e-raze® rejuvi tattoo removal method was commercialized under the name of e-raze®, which was claimed to be safe with a low scarring rate of 6%.  The e-raze rejuvi tattoo remover paste consists of zinc oxide, magnesium oxide, calcium oxide, isopropanol, triethanolamine, and benzoic acid.  The skin is covered by the paste and punctured in the tattooed area under treatment.  The paste is then reapplied over the tattoo and left in place for 6–8 days.  A scab forms and peels off in 10–20 days.  It is recommended to be performed on a tattooed area no more than 2.3 square inch.  A more recent variation of Variot's method is the Tatt2Away® tattoo removal system commercialized by the Rejuvatek Medical Inc, Sandy, UT, USA.  It is a similar escharotic technique which sheds off the tattoo inks along with scabs after a patented solution called TEPRSOL is injected into tattooed skins.  Time between treatment sessions is approximately 6–8 weeks.  Careful google search in internet could reveal more variants of  Variot's method such as A+ Ocrean that claims using nature sea salts and no acids.  For your information purpose, such "natural" ingredients could only be natural for human's digestive system, but definite not natural when they are injected into human's skin tissue.  From literature point of view, these methods could be effective to a certain extent if it is done without infection and low scarring rate.  However, unlike laser tattoo removal, the problem with these Variot's methods is the lack of clinical studies that support their claims of efficacies or risks.  Secondly, these devices or tattoo removal solutions (pastes) should be regulated by FDA.  However, most of them were commercialized without FDA's approval.  It could be worse than using an unknown or wild brand, cheap laser from China for tattoo removal by a layman without clinical training.  Both practitioners and manufactures are vulnerable for potential law suits.  Nobody could make meaningful recommendations on these alternative tattoo removal methods without established evidences in medical literature.

The last alternative tattoo removal method is actually used by some plastic surgeons who remove small tattoos completely in areas of adequate skin laxity.  The complications are the same as any surgical procedure, including mainly the risk of unaesthetic, hypertrophic, or keloid scar.

Although laser tattoo removal is the gold standard practice for tattoo removal, its efficacy to certain colorful inks remains to be improved.  The operation of laser requires clinical trainings.  In spite of FDA approved lasers being used, complications such as dyspigmentation, textural changes, or even scaring could result from the misuse of laser parameters.  More recently, sub-nanosecond laser or picosecond laser are reported to be more efficient than conventional nanosecond laser in removing black tattoos, but cost as much as 2.5 times for each treatment session.  There are also treatment modalities such as R20 and R0 that could significantly reduce the total treatment sessions for qualified customers.  As a scientist in the scientific field of selective photothermolysis, the author expects to see major breaking throughs of laser tattoo removal techniques in near future.  Such breaking throughs are based on the removing of "blindness" in the laser tattoo removal process by innovative techniques.  Such "blindness" includes the unknown ink absorption spectrum, unknown laser pulse energy that is required to break up the inks, and unknown thermal properties of ink particles that regulate the efficiency of laser energy deposition.  Highly efficient, smart, no-scarring, layman operable laser machines for all ink colors will emerge in less than 5-10 years.

In summary, laser tattoo removal remains the gold standard tattoo removal method as it currently dominates over 66% or market share.  The dominance will further expand as innovative lasers emerge in the tattoo removal market.  Safety should be the number one consideration when you are facing the decision on how to get your unwanted tattoo removed because you might end up paying for expensive surgeries to fix the serious scarring. You could take advantage of special sales of laser treatments that are advertised to recruit new customers.  You could start from removing a small area of tattoos to control unknown risks if you are financially limited to lower cost, non-laser alternative methods.  Laser tatoo removals with professionals is the safest, but it does require multiple sessions.  Laser tattoo removal creams are relatively safe, but it may not be as effective as claimed.  Surgical removal is effective and quick, but always with a scar.  Other non-laser alternatives could be effective to a certain extent, but at the cost of unknown and significant risks.